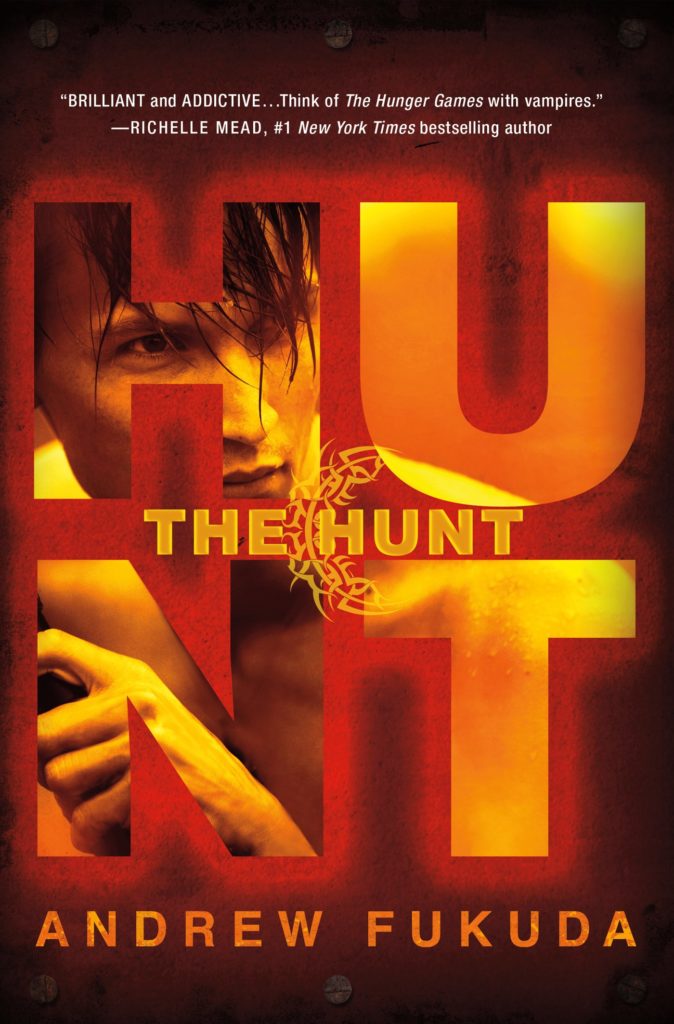 Seventeen-year-old Gene struggles to survive in a society where humans have been eaten to near extinction by the general population. When Gene is chosen to participate in the government-sponsored hunt for the remaining humans, he must learn the art of the hunt but also elude his fellow hunters whose suspicions about his true human nature are growing.

“In this terrifying and inventive adventure, Fukuda turns the vampire novel inside out…With an exciting premise fueled by an underlying paranoia, fear of discovery, and social claustrophobia, this thriller lives up to its potential while laying groundwork for future books.”
—Publishers Weekly

“The story is bona fide creepy, and as it builds to its cliffhanger ending (which delivers quite a good twist), readers will be torn between hoping Gene can maintain the ruse and that he will take on the bloodsuckers already. As revolutions go, this one is well worth keeping on your radar.”
—Booklist

“…strong writing distinguishes The Hunt from the legions of teen dystopian novels and with both a plot twist and a cliff-hanger at the end, readers will be left salivating for the next installment.”
—School Library Journal

“Fukuda takes the feeling of isolation that dominates adolescence and builds a world around it in a novel where the tension rarely slackens. He turns up the violence a notch from THE HUNGER GAMES with language that is as graphic as it is eloquent. Readers will hanker for answers as they’ll discover a kindred spirit in Gene, who so eloquently describes the feeling of being an island in the middle of a vast ocean.”
—Maximum Shelf

“From page one, Fukuda draws the reader into a fast-paced, suspenseful narrative of suspicious coincidences, unanswered questions, and building action…In addition to fans of vampire fiction, this book will appeal to readers who enjoy survivalist stories, as well as a broader population of students drawn to action and adventure. Boys in particular will enjoy The Hunt and look forward to the next installment in Fukuda’s series.”
—VOYA Magazine (Voices of Youth Advocates)

“With razor-sharp prose, a genius plot, and a searing pace that will have you ripping through the pages, Fukuda creates a dark and savage post-apocalyptic world where humans are nearly extinct and love manages to bloom despite all the odds stacked against it. An exceptional novel—I can’t wait for the sequel!”
—Alyson Noël, #1 New York Times bestselling author of the Immortals Series

“A book that grabs you by the throat and doesn’t let go. The Hunt is both terrifying and sublime, with every page evoking that fragile, yet unyielding thing we call humanity.”
—Andrea Cremer, New York Times bestselling author of the Nightshade Trilogy

“One of the most brilliant, original books I’ve read in a very long time. Andrew Fukuda has created a vision of the world both terrifying and fascinating. This is the kind of book you’ll want to stay up all night to finish!”
—Richelle Mead, #1 New York Times bestselling author of the Vampire Academy Series

“Chilling, inventive, and utterly unputdownable, The Hunt masterfully dances between horror and dystopian. Readers, proceed…if you dare. This book will bleed into your nightmares.”
—Becca Fitzpatrick, New York Times bestselling author of the Hush, Hush Saga